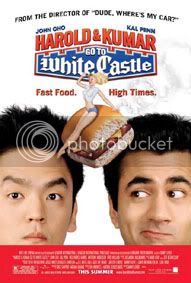 Cause if I did, this movie probably would've been a lot funnier. Or so I assume, as I've never smoked up in my life (Allah does not permit it). So I'll have to judge it based on my straight-edge lifestyle. From that standpoint, it was still mildly amusing, with a certain amount of inescapable charm that kept me involved enough in the movie throughout. It's not a good movie by any stretch, but it wasn't that bad either.

The premise of the flick is standard road movie stuff, two dudes set off on an adventure stoned, and run into many difficulties and silly obstacles in the pursuit of their goal. The goal in this case, is to get some burgers from White Castle to satisfy their munchies. It's a tried-and-true formula, with the difference for this movie being the two dudes in question, a Korean-American and an Indian-American. One is an investment banker, the other a med-school applicant, the types that are usually portrayed as uptight nerds and ethnic stereotypes in comedies. In this movie, they're shown to be the same slack-ass burnouts that Caucasian Americans are shown to be in such flicks, albeit with more booksmarts.

Stars John Cho and Kal Penn carry the movie rather effortlessly, creating affable characters that are fun to follow and cheer for throughout their misadventures. Given the ethnicities of the leads, the movie has ample opportunity to find humour in the stereotypes about them, choosing to turn them on their head and find the humour in the inherent racism that surrounds the stereotypes. It's clever,and funny at times, but never exceedingly clever, nor is it exceedingly funny.

Which pretty much sums up the movie as a whole. I enjoyed it enough, but never lost my shit with laughter. The strongest scenes were the most creative ones, the fantasy sequences with Harold and his dream girl in Burgerland and Kumar in love with his anthropomorphic big bag o' weed. Plus, I dug the Neil Patrick Harris cameo. But it wasn't a quality film, merely a pleasant distraction. Which is pretty much what you should be looking for in such a movie.