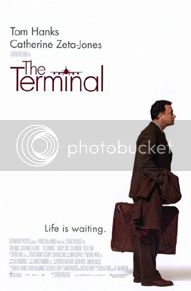 The first half of the film was lots of fun. Tom Hanks is an amazing actor. He's one of the biggest movie stars in the world, yet it takes less than five minutes to stop seeing TOM HANKS and start seeing Viktor Navorski. Navorski is a man trapped in the JFK terminal in New York for months when his passport is revoked due to the rebel coup in his homeland, eliminating the country that issued him a passport. He is also a sweet man whose exploits in the airport fuel the fun part of this movie. Navorski and his cohorts are a lovable bunch, and the things he can do in the airport are fun and inventive.

The problem is, that I think Speilberg gets carried away showing everything his imagination can think of for living in an airport (although, the DVD release will no doubt reveal a few more extra scenes). Thus, the movie was a little too long. Plus, he stuck with the first half a little too long, so when the driving force of the second act rolls around, it feels rushed and lacks focus. What is the ultimate goal of the movie and Viktor? To enter New York? To return home? To get the girl? Speilberg pursues all these goals at once, but I didn't really care. The sense of urgency was lost by indulging a little too long in the first half of the movie.

The girl in question is a flight attendant played by Catherine Zeta-Jones. I gotta question the necessity for her character at all. The pursuit of her muddles the purpose of the movie. I kinda think she was added to help the numbers of the movie, to bring in the date crowd and to give the flick another name to open the flick. The interactions between the two leads, while sweet, are unnecessary, un-fulfilling and less interesting than Navorski's interactions with his new friends, or even with his foil, played brilliantly by Stanley Tucci.

Ultimately, I think the story of this film is one that is intimate by nature, and thus should have probably been done on a smaller scale. It's a small film trapped in a blockbuster's body. Of course, Speilberg forgot how to do a small film years ago, if he truly ever knew. I think that's what prevented me from truly enjoying the movie, that and the lack of focus and the fifteen or so unnecessary minutes. So, I gotta go with a 3 out of 5 on this one. I considered 2.5, but Hanks and Tucci are too good to give it a 50% grade. If you really wanted to see this movie, then see it. If you were on the fence, or didn't really care, then don't.